The winner of the Phillis Award 2013 is: 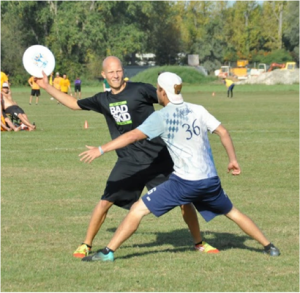 Johannes started playing ultimate in 2008. With his current club team Bad Skid he won the German championships (open division) 2012 and 2013. With the junior team of his club he won several national titles and with the German junior open team (U17 and U20), Johannes won the European championships several times, including this year with the U20. Johannes also represented Germany at the U23 Worlds in Toronto this year, right after his participation at the National Ultimate Training Camp in Amherst. In Toronto, Johannes made it into semi-finals and won the spirit award with the U23 open team.

Below you can find a report from Johannes about his trip:

My Phillis Award trip began 11am on Monday, July the 8th, 2013 at Luxembourg International Airport. From there my flight went through London to Toronto, where I arrived at 7pm local time. The airport was total chaos, since it had been pouring rain all day and some parts of the city were flooded. Because of that, I had to wait almost two hours for a taxi.

When I was finally able to get a cab, it took me toward downtown Toronto and the home of Jeff Lindquist, with whom I stayed during my time in Toronto. Jeff is one of the captains of GOAT, currently probably the best ultimate team in Canada, and he also played for Canada at the World Games in Cali, Columbia. Jeff is a very cool, very kind person. One look at his apartment and you could tell that most of his free time is dedicated to ultimate. Upon arriving, however, I was quite tired and went right to bed, quickly falling asleep.

The next morning I took in the city a bit by myself, since Jeff had to work. In the afternoon I made plans to meet Luca Miglioretto, a Freespeed player from Basel who was in Toronto for GOAT tryouts, and together we did a little more sightseeing. That evening I was able to attend a GOAT practice, which was a lot of fun, even if it didn’t seem that different from a Bad Skid practice.

Wednesday continued as Tuesday had left off, namely with more ultimate. A couple GOAT players were free to meet up, including Davide Morri from Italy (who was also in Toronto for GOAT tryouts), so we all spent the day throwing and doing other drills.

After lunch in Little Italy I was off to a summer league game. The game was more pickup-style, with an emphasis on fun, and after a win for my team we wound up grilling with our opponents.

On Thursday morning I had to be at the Toronto Greyhound station by 9am for my bus to Boston. After a 14 hour journey I arrived around 11pm in Amherst, Massachusetts, a town of 20,000 people roughly 1.5 hours by car from Boston. The interesting thing about Amherst is that with two colleges and another university, it has about as many students as it does permanent residents. The National Ultimate Training Camp (NUTC) is always hosted at one of the colleges there, specifically Amherst College.

NUTC has been around for 12 years and is available for youths between 14 and 18 years old. There are four sessions each year, each of which run from Saturday to the following Thursday. Normally each session has between 50 and 60 campers, but my session (NUTC Session B in 2013) had more than 60.

Jim and Barbara Pistrang picked me up from the bus stop in Amherst. Jim has played for more than 40 years, and the couple welcomed me to stay with them for a few days before and after the camp. They were both very kind, making sure that I had a great time and the chance to see as much of the area as possible during my short stay. On Friday they also showed me some of the area around Amherst and spoiled me with their excellent cooking.

NUTC began then on Saturday afternoon. At the camp I received a warm welcome and immediately felt quite comfortable. Four of the twelve counselors were players from the 2012 US junior national open team, and these four I recognized right away from our game against them in Dublin. Most of the counselors had played for top American teams like Ironside (Boston), Sub Zero (Minneapolis), Dark or Light (Amherst) or Riot (Seattle).

The whole camp was hosted in one building on the Amherst College campus, and each dorm room was for two campers. My roommate was from the Washington, DC area. After unpacking my things I went with the other 60 campers out to the fields, which were about half a kilometer away. We played a game of pickup in order to get to know each other on the field, and after dinner we were then able to spend some more time getting to know each other better off the field. 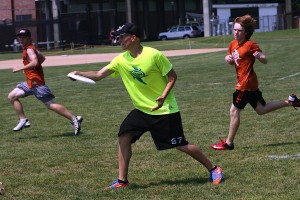 The camp kicked off for real on Sunday, the following day. Each day at camp was actually very similar. We had breakfast each morning at 7am, eaten in the cafeteria. There was always something going on in the morning, especially because there were also other summer camps going on around the Amherst College grounds, including camps for lacrosse, tennis, and soccer.

After a good breakfast we’d get to the fields by 8am. Then we would warm up and have a new rule explained to us each morning. Marking infractions were clarified on Sunday, for example, as well as how to respond to the corresponding calls. On other days there were other rules explained, like pick calls or other kinds of fouls. 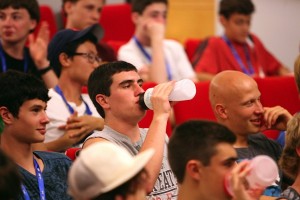 Afterwards we did drills, each day with a different focus. Sunday’s focus was the stall-count reset from the sideline, Monday was marking and breaking the mark, Tuesday was physical defense.

After drills there would be additional conditioning before taking a break for lunch. After this one-hour break we’d go back out to the fields for more drills, and of course there was also plenty of real ultimate played.

The program would last until around 5pm, after which we were able to cool off in the college pool, which of course I took advantage of each day. After taking a dip in the pool, typically involving some kind of ultimate in the water, we went right to dinner.

We had a little free time after dinner, and then each evening featured a different program. On Monday there was actually a campers-versus-counselors game before dinner, which was a lot of fun for me because it was an opportunity to play against very talented American players. After the game and after dinner on Monday we also had Team Night.

During the day on Sunday and Monday we kept switching up the teams for drills and games, but on Monday evening we were placed into five final teams for the rest of camp. Each of the five teams had two counselors to itself, and after Team Night we did most of the drills within our own teams. Once the teams were set we also did introductions within our groups so we could get to know our teammates better. At the end we played several games against the other teams in order to determine which color each team got to be for the rest of camp.

Tuesday also featured a side program, the Disc Olympics, with three competitions between the different teams. The first was for longest throw. Participants were divided into different age levels and one winner was identified in each. Unfortunately I had to content myself with second place in my age group. Another competition was for the longest time aloft, for a pass thrown by one competitor and caught by another. Last but not least was a disc golf challenge. The three competitions were all completed in the evening, just before dinner. 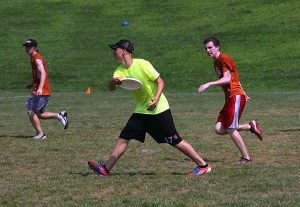 The NUTC tournament also began on Wednesday. Through a total of four games, two in the morning and two in the afternoon, each team played the other four teams. The top four finishers of the round robin then played semifinals and finals on Thursday morning. My team made it to the finals, but then had to admit defeat. NUTC finally ended on Thursday afternoon with a small farewell ceremony.

Jim and Barbara picked me back up on Thursday, since my bus trip back to Toronto wasn’t until Friday evening. Back at their home I was able to relax a bit. On Friday Jim and I took a short hike up a mountain near Amherst, where we had a very good view of the surrounding area. Then we took a swim in a nearby lake, which was wonderful after the extreme heat and humidity we had during camp. Famished, we then went to a local grill restaurant for spare ribs.

After that, with my bus leaving for Toronto at 8pm, I had to pack my things and say goodbye. After a pretty long ride through the night, I arrived the next morning at 11am at the hotel where the rest of the German U-23 team was staying. From there my Phillis Award trip was over and the U-23 World Championships had begun.

These two weeks in Toronto and Amherst were really, really great. I was able to form many new impressions and experience new things. The best part of my trip, though, was getting to know so many kind, friendly, and open-hearted people. That’s also the main reason I would love to take the same kind of trip again, at any time. That is one of the goals of the Phillis Award, to promote the international exchange between ultimate players. Its other goals, for example to promote Spirit and fair-mindedness, were of course well supported we well with the help of NUTC.

For that reason I encourage everyone in the right age group next year to apply for the Phillis Award, because these are experiences and memories that you could never in your life forget. In my opinion, the Phillis Award is the best way to commemorate Phillis and preserve the many fond memories of him that so many have.

I would also like to thank again all of those individuals who made this trip possible for me. Many thanks of course to the Phillis Award Committee, which gave me the opportunity to experience such a wonderful two weeks. In particular I would like to thank Stefan Rekitt, who prepared me extremely well for the trip. I would also like to thank Jeff, Jim and Barbara, who all welcomed me so warmly into their homes, and of course Tiina Booth, who founded NUTC and has managed it so well for many years, and without whom the camp would not be possible.